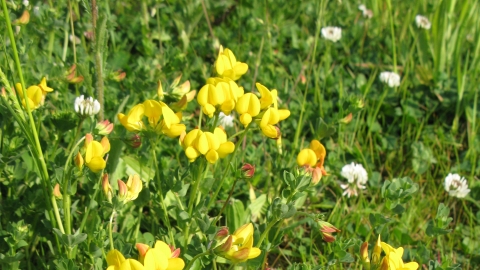 The common bird’s-foot-trefoil is also know as ‘Granny’s toenails’, which gives an instant, and perhaps not-so-pleasant, impression of the claw-like seed pods of this abundant and sprawling species. Other common names include ‘butter and eggs’, eggs and bacon’, and ‘hen and chickens’, which all refer to the egg-yolk yellow flowers and reddish buds. Widespread and found in all kinds of grassy places, from lawns to downlands, roadside verges to heathlands, common bird’s-foot-trefoil can be seen flowering from May to September.

Common bird’s-foot-trefoil is a member of the pea family. Its yellow flowers look like little slippers and appear in small clusters. They are followed by seed pods that look distinctly like bird’s feet or claws, hence the common name. A low-growing plant, its leaves have five leaflets and are downy.

Common bird’s-foot-trefoil is an important foodplant for the caterpillars of the common blue, silver-studded blue and wood white butterflies; the latter two species are both classified as Priority Species under the UK Post-2010 Biodiversity Framework. Its flowers are a good nectar source for bees.

The conservation status of the Bird’s Foot Trefoil is classed as common. Birds Foot Trefoil can grow up to 35cm in height and will be seen between the months of May to September 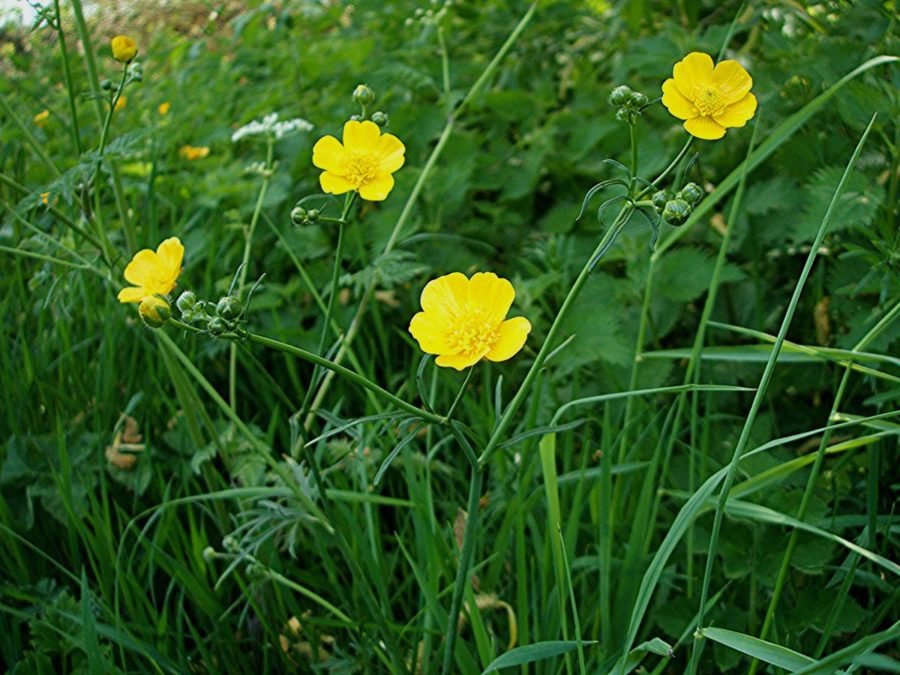 Meadow buttercup are widespread and a common perennial in meadows, pastures, and at woodland edges. It prefers slightly damper, calcareous soil sites, where it can grow so dense that it forms yellow meadows that dazzle in the sunshine.

The Meadow buttercup has yellow flowers, It has rounded leaves, divided into three to seven lobes, and does not possess the runners of Creeping Buttercup.

The conservation status of the Meadow Buttercup is classed as common. Meadow Buttercups can grow up to 1m in height and will be seen between the months of April to October 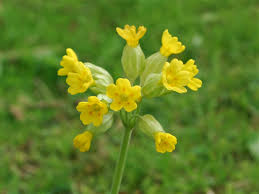 The Cowslip is a cousin of the Primrose and is also an early spring flower. Formerly a common plant of traditional hay meadows, ancient woodlands and hedgerows, the loss of these habitats has caused a serious decline in its populations and now fields coloured bright yellow with its nodding heads are a rare sight.
Like many other spring flowers, the Cowslip is closely associated with English folklore and tradition, including adorning garlands for May Day and being strewn on church paths for weddings.

The Cowslip displays a rosette of green, crinkly, tongue-like leaves, low to the ground. Its tube-like, egg-yolk-yellow flowers are clustered together at the ends of its upright, green stems.

The conservation status of the Cowslip is classed as protected in Northern Ireland under the Wildlife Order, 1985. Cowslip can grow up to 25cm in height and will be seen between the months of April to May

Cuckooflower, also commonly known as ‘Lady’s-smock’, is a pretty, springtime perennial of damp, grassy places like wet meadows, ditches and riverbanks, as well as roadside verges. Its pale pink flowers bloom from April to June and are thought to coincide with the arrival of the first Cuckoo – a sure sign that spring has arrived at last

Cuckooflower has a rosette of leaves at its base and an upright stem that bears the delicate, small, pale pink or mauve flowers. Each flower has four petals, although double-flowered varieties do appear.

The conservation status of the Cuckooflower is classed as common. Cuckooflower can grow up to 50cm in height and will be seen between the months of April to June 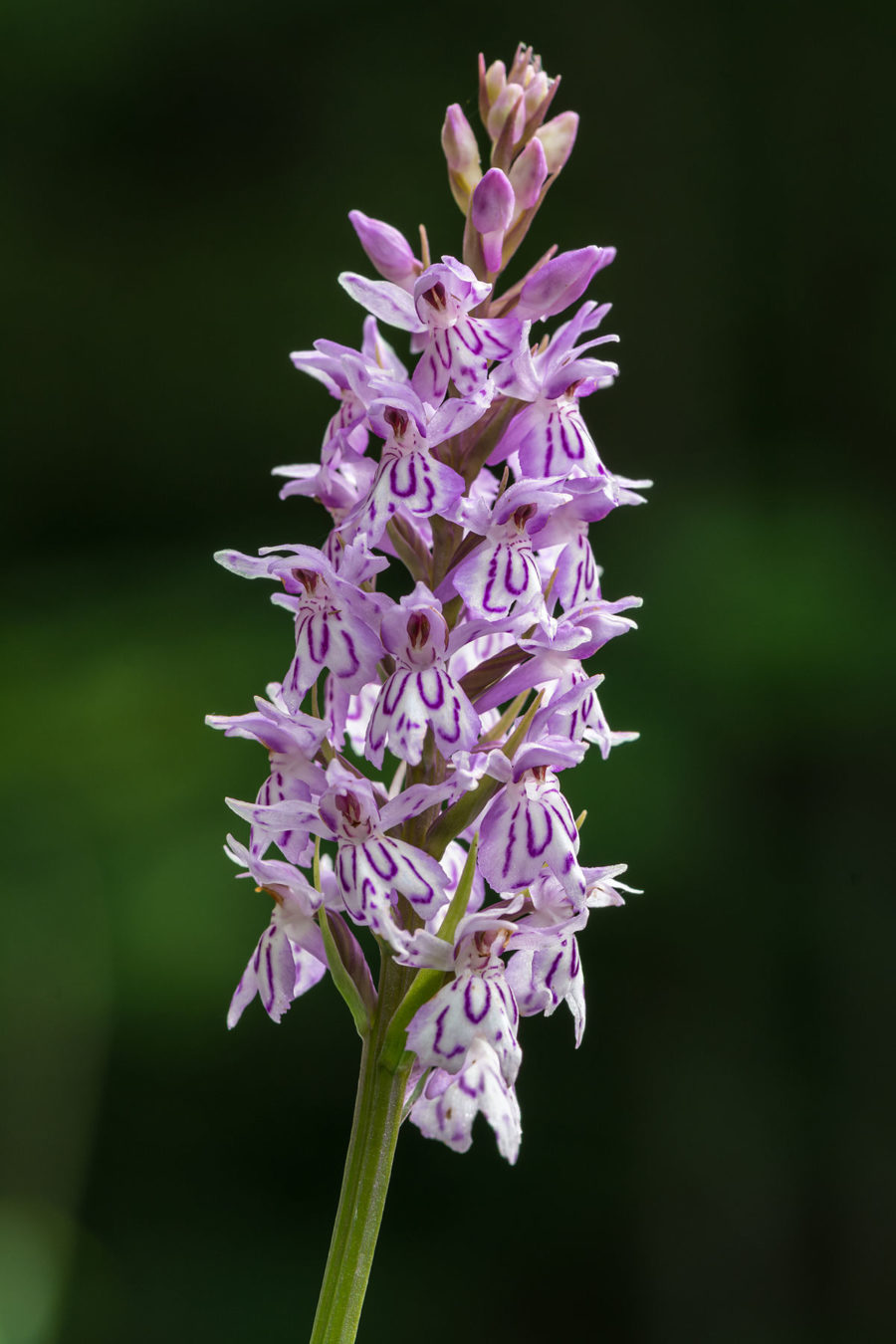 The Common spotted-orchid is the most common of all UK orchids and the one you are most likely to see. It grows in many different habitats, including woodland, roadside verges, hedgerows, old quarries, sand dunes and marshes; sometimes so many flowers appear together that they carpet an area with their delicate, pale pink spikes.

The Common spotted-orchid gets its name from its leaves, which are green with many purple, oval spots. They form a rosette at ground level before the flower spike appears; narrower leaves sheath the stem. The flowers range from white and pale pink, through to purple, but have distinctive darker pink spots and stripes on their three-lobed lips. The flowers are densely packed in short, cone-shaped clusters.

The highly perfumed flowers of the Common spotted-orchid are particularly attractive to day-flying moths. 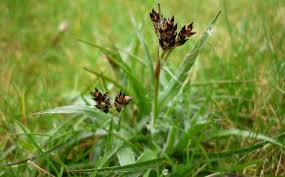 Field wood-rush is a common plant of grassy areas, such as lawns, greens and downlands; it is particularly keen on acidic soils, but can be found on chalk. It has dark brown rounded flowers. It is also known as Good Friday Grass and Sweeps Broom. 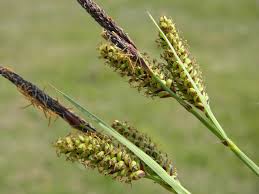 The conservation status of the Glaucous Sedge is classed as common. Glaucous Sedge can grow up to 40cm in height and will be seen between the months of May to June. 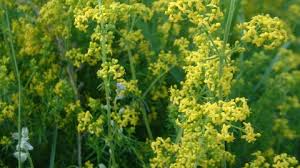 The frothy, yellow flowers of Lady’s bedstraw scent the air of grasslands, chalk downlands, meadows, heaths and sand dunes with honey. The stems can be so dense with flowers that they carpet the grass with yellow. Dried, this flower has the scent of new-mown hay. 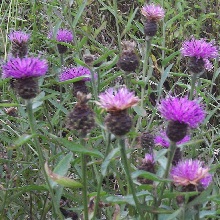 Lesser knapweed, also known as ‘Common knapweed’ and ‘Black knapweed’, is a thistle-like plant that can be found on all kinds of grasslands, from roadside verges to woodland rides, clifftops to lawns. It is a huge favourite of all kinds of butterflies, including Common blues, Marbled whites and Meadow browns, and is sometimes covered in these species.

The bright pink-purple ‘flowers’ of Lesser knapweed are actually composite flower heads made up of many small ‘florets’ (tiny flowers), surrounded by a crown of long, ragged, pink bracts (leaf-like structures). It has deeply divided, oblong leaves.

The conservation status of the Lesser knapweed is classed as common. Lesser Knapweed can grow up to 1m in height and will be seen between the months of June to September. 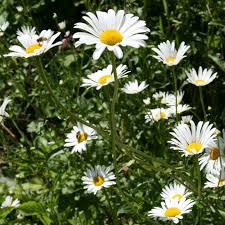 A typical grassland plant, the Oxeye daisy thrives on roadside verges and waste ground, as well as in traditional hay meadows and along field margins. Its large blooms appear so bright that they appear to ‘glow’ in the evening, hence the other common names of ‘Moon daisy’ and ‘Moonpenny’.

The Oxeye daisy is easy to identify by its large, round flower heads that appear on single, tall stems. It has spoon-shaped leaves at its base and thin, jagged leaves along the stem.

The conservation status of the Oxeye Daisy is classed as common. The Oxeye Daisy can grow up to 60cm in height and will be seen between the months of June to September. 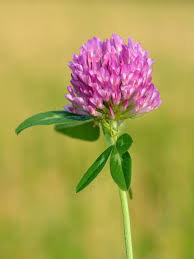 Red clover is a common plant of all kinds of grassy areas in the UK, from lawns to pastures, roadsides to meadows. It is sown as a fodder crop for livestock and has long been used in crop rotation systems because of its ability to fix nitrogen, enriching soils. The trefoil leaves are collected by Wood Mice and the flowers, are sort after by all kinds of bumblebees for their nectar.

Like other clovers, the leaves of Red clover have the familiar trefoil look with three green leaflets each bearing a white V-shaped marking. The pinky-red flowers are borne in rounded heads.

The nectar-rich flowers of Red clover are a favourite of many species of bee, including the Common carder bee, Honeybee and Red-tailed bumblebee.

The conservation status of Red Clover is common. Red Clover can grow up to 40cm in height and will be seen between the months of May to October 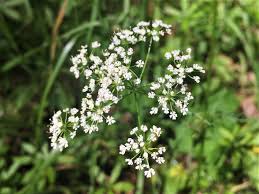 Pignut is common in open woodland, hedgerows and dry grassland, Pignut is a small umbellifer (member of the carrot family) with fine leaves and delicate stems. Small umbels (umbrella-like clusters) of white flowers, and are attractive to a range of insects, such as soldier beetles and hoverflies.

The conservation status of the Pignut is classed as common. Pignut can grow up to 40cm in height and will be seen between the months of May to June. 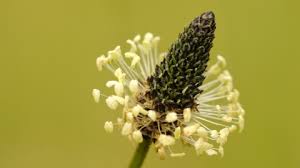 Ribwort plantain is a plant of grasslands, field edges and cultivated ground and tracks, and regularly pops up in lawns as a weed. In contrast to the long flower spikes of greater plantain, the short, oval flower heads of ribwort plantain appear as if balanced on the top of their thin, wiry stems. Its seed heads remain for most of the winter providing food for goldfinches and other seed-eating birds.

Ribwort plantain has spear-shaped leaves that form a rosette at the base of the plant. Short stems grow from its leaves, with compact flower heads that display protruding white stamens. The flower heads gradually turn brown and seed. 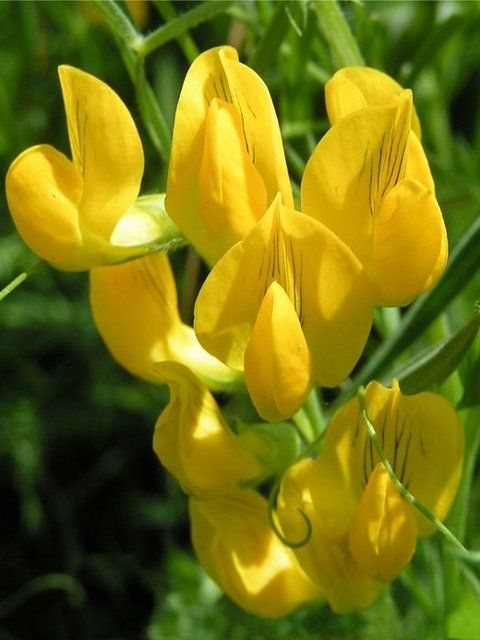 Meadow vetchling is a member of the pea and clover family (legumes) that can be found scrambling and climbing through grassy areas, including rough grassland, roadside verges and waste ground. Groups of four to twelve yellow flowers appear attracting bees and wasps.

Meadow vetchling is a scrambling plant with long stems that end with a group of yellow, pea-like flowers. The flowers are followed by shiny, black seed pods that look like peapods. Its leaves comprise a single pair of leaflets that have tendrils.